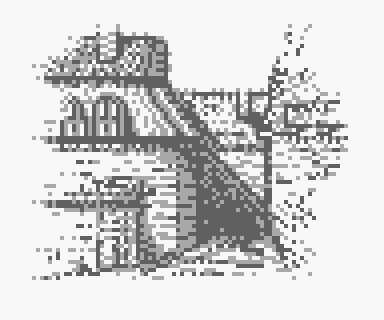 Konami’s 1991 Cave Noire is a bite-sized dungeon crawler for the original Game Boy. Released in Japan only, it seems to have come and gone without much notice, outside of a small following on the internet. With minimal story and randomized dungeons, it can be considered a cut-down take on the Roguelike genre, with an emphasis on evading monsters.

Cave Noire has four dungeons with 10 difficulty levels each. Each dungeon uses mostly the same creatures and chamber data, but they have unique background tilesets, and the win conditions are different.

You can travel down a floor by using a staircase tile, or by dropping down a pit, but you cannot return to a previous floor. The dungeons vary between short floors with one or two chambers, and larger floors with up to about 8 chambers. Monster and item information is persistent for as long as you are on a floor, so if you dropped a health potion in a previous room, it will still be there on your return. While the dungeons do have a bottom floor, it is very unlikely that you will ever get there before you die or fulfill your win conditions.

You’re given a quota of monsters to destroy. On higher levels, this quota gets pretty high, and you need to pick your battles carefully.

Strangely, gold has no purpose in Cave Noire outside of this one quest — there is nothing to spend it on. Gold is found in treasure chests, lying on the ground in some rooms, and is occasionally dropped by the tougher enemies when defeated. Larger batches of gold are found on lower levels of the dungeon.

Pick up a certain number of orb / goblet items and escape the dungeon. This might be the most challenging quest, because the orbs that you collect will occupy your inventory slots, squeezing out useful spells and potions. On the ‘M’ difficulty, the required orbs will take up your entire inventory.

Locate keys in the dungeon, and then use them to free captive Fairies. Rescuing a Fairy will destroy all enemies and partially remove fog from the screen.

Cave Noire features monsters with variable sizes, such as dragons that occupy four tiles, and different movement patterns. Some of them chase the player, while others patrol vertically or horizontally, or move in a small circle, or hug the walls.

Monsters will attack when you are adjacent to them, or retaliate after you strike them first. But you can also evade monsters indefinitely, even if they are right behind you, as long as you keep moving.

Periodically, you will find yourself on a dark or foggy floor. The fog masks all terrain hazards, and enemies are harder to identify (they’re drawn as a pair of cliche “evil eyes” when on a fog tile). When you move, any fog around your eight neighboring cells will be lifted. You have to tread carefully through fog so as not to fall down a hole (travel to next floor and take 4 damage), fall into lava (instant death), or get cornered by a monster.

Some resources on the game:

To the best of my knowledge, this is every enemy in the game: