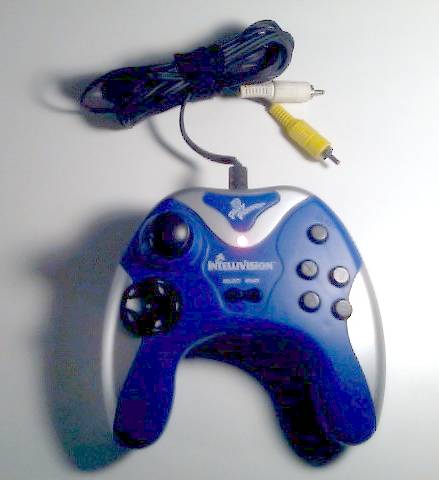 Paid six bucks. Disappointing unit for a variety of reasons.

The Intellivision had a crazy dial-and-keypad controller with side buttons. It supported plastic overlays for game-specific control instructions, and the dial could detect 16 directions of movement. Some would argue that the Intellivision controller was overly complicated and a pain to use, but it’s a huge part of the system’s character.

This Plug-and-Play unit uses a pretty standard layout with a d-pad, thumbstick and some face buttons. However, the directional controls are very stiff and unresponsive, and the thumbstick above the d-pad also behaves like a d-pad — not capable of detecting more than 8 directions.

So while it’s a concern that the unit doesn’t actually resemble an Intellivision controller, it’s overshadowed by not even being a competent controller.

The underlying architecture isn’t Intellivision: the games featured are reprogrammed for clone NES hardware, and if you look closely at the games, you can spot NES graphical artifacts like map palette corruption at the edge of the screen during 8-way scrolling (Hover Force).

Turn off your high-beams

Lastly, the unit has a red LED power indicator that beams in your eyes while you play.

I see there is a 10-game version that looks more like a Sega Genesis controller. The one I picked up has 25 games. Some of them are pretty cool, but the shoddy controls and inaccurate representations of the included games are a problem.