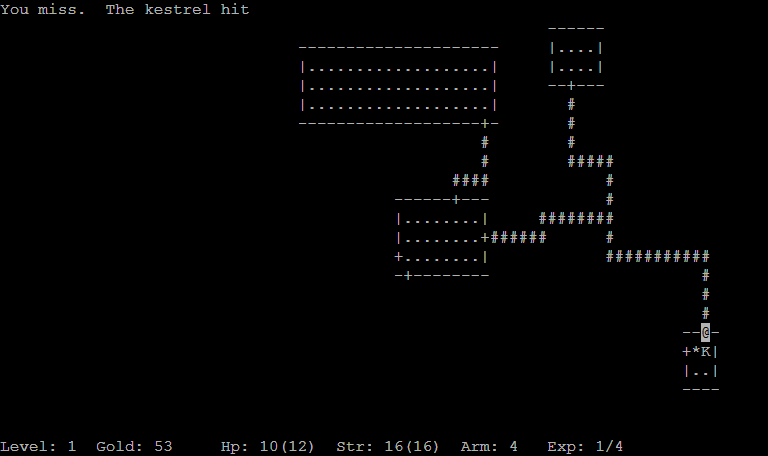 Rogue V5, as played on rlgallery.org.

Following are some scattered thoughts about the Roguelike genre, and a to-play list for myself as I explore the catalog.

Roguelikes are basically games that are like the 1980 Unix hack-and-slash Rogue. Originally played on text terminals connected to mainframes, your avatar is a little ‘@’ symbol, tasked with recovering the Amulet of Yendor from the 26th floor of the Dungeons of Doom. If (or rather, when) your character dies, it’s back to the very start with a fresh dungeon layout and new item definitions. Rogue maintains a high-score list, so that multiple users of the same system can compete for the highest amount of gold collected.

Rogue’s action is turn-based, and several aspects of the game are randomized — dungeon layouts, what potions and scrolls do depending on their description — to the point that they can’t be memorized from one game to the next. The chances of beating Rogue are very not in your favour. Luck is a large factor in determining your chances of survival, and on top of that, the difficulty curve soars during the final batch of floors.

The procedural generation systems and intense challenge make Rogue addictive and playable, and many developers have sought to emulate its appeal in the years since its release: from other terminal games, with increasingly complex underlying systems, to modern twitch-action games that have little resemblance outside of procedurally generated maps and permanent player death. I like both kinds.

Will add thoughts as I play… This is going to take a while. Many interesting games are absent from the list, and I will try to flesh it out as I go along. The dates listed shouldn’t be taken too seriously, as I found them from random searches on the internet, and they don’t take subsequent work into account. I just wanted to sort the games along a general timeline.

Beneath Apple Manor | 1978
Superficially similar to Rogue, and released a couple of years earlier on home systems.

Cave Noire (Game Boy) | 1991
Like a cross between Rogue and a puzzle game like Adventures of Lolo. I wrote a short post about the game here.

John Harris wrote several “@Play” blog posts about Roguelikes, Roguelike design, and the genre’s history on GameSetWatch. His articles are collected on his blog, rodneylives.blogspot.ca, and in his eBook @Play: Exploring Roguelike Games.

There are many insightful posts about development on the Roguelikedev Subreddit.

RogueBasin is a Roguelike community wiki.

Geometry, Line of Sight and Pathfinding