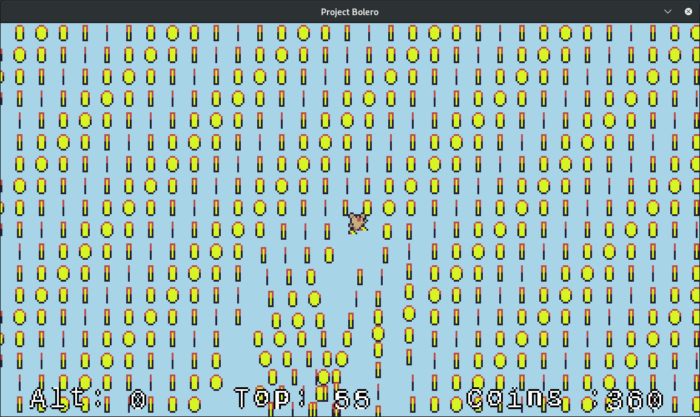 Visually, there is very little difference between this devlog snapshot and the one from last week. Most of my efforts lately have been organizing the core (scene, actor, maps, animations) so that it can be used across multiple projects. Bolero‘s main loop is a lot cleaner and easier to understand now, and even though the project code related to Up High is still a mess, it can now be worked on separately from the core.

I really don’t know where the message stack thing came from, or why I avoided class inheritance. It’s not something I planned on doing at all, but it seems like it’s working OK, at least as a proof of concept. Maybe I’ll tear it all out next week? I guess I’ve had ZZT on my mind too much lately.

I am committing to a prototype release of what I have on or before March 31st. That should give me time to follow up on any other restructuring that needs to be done, and also time to  make an actual game out of this stuff. As a response to my previous devlog: spending time  on the engine core was absolutely worth it.

I still didn’t get that font replaced, but did some reading on bitmap font usage in games and made a few small ones as a test.

Whoops, I’m writing this a bit too late to set appropriate goals here. I’ll need to review my project notes and sort out what needs to be looked at next. Here are some odds and ends that need to be looked at in the meantime: