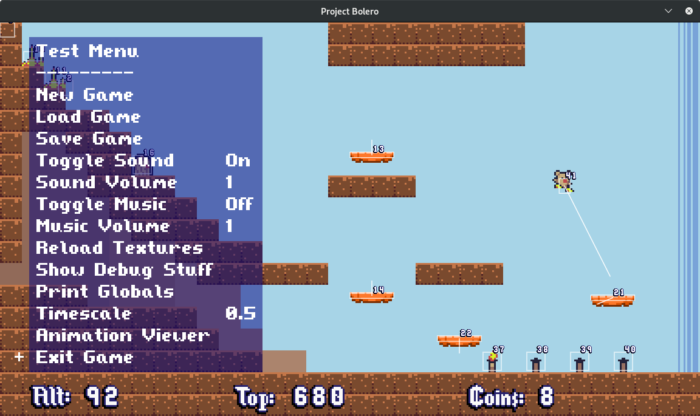 Wow. If there is one thing I’ve learned about myself this week, it’s that I do not like writing widget-handling software at all. At least, when there are other things I’d rather be working on that are being held up by it. If I end up going the embedded live-editing route in the future, I’ll probably look into integrating someone else’s widget framework.

I did end up cobbling together a simple animation viewer. At some point, I could add a widget menu to adjust parameters, and save that info back to the source files.

I don’t feel like this has been a productive week, and I’m a bit concerned about my progress. The codebase perennially needs work, owing in part to me not knowing what I want out of it, or what I’m doing. I should have just started with a simple scrolling shooter or breakout game!

The widgets are half-baked and messy, but they’ll be fine for one game. I suppose this applies to just about everything else in the engine as well. In light of that, then, what I want for next week is to have the skeleton of the game decided upon and sketched out, from beginning to end. Then spend another week filling it out and fixing issues as they arise. Come 31st of March, I should have a reasonable prototype, and something to refine and extend for future projects. That will be the point to decide on whether to keep moving forward, or if this project needs to be axed in favor of something else.