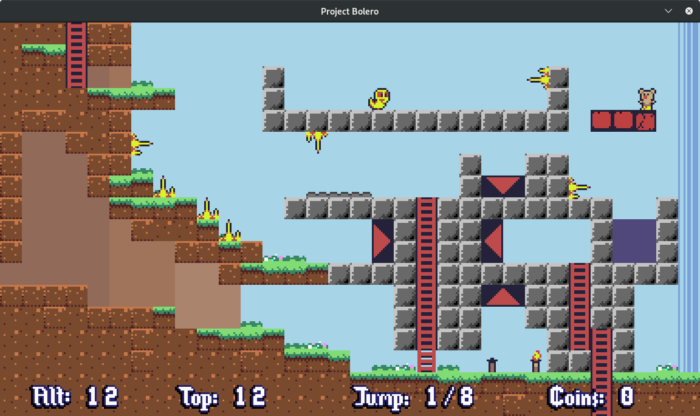 Most of the work this week has been real game stuff, not engine infrastructure. It’s been refreshing. I’m getting more comfortable with this just being a small prototype game. That’s what I need. Get it done, then tear out or fix the stuff that didn’t work well internally, and move onto the next thing.

I tried adding sloped floors, but the engine (not LÖVE, which is pretty great, but my scripts sitting on top of it) and platformer code is too messy to easily reason about correct actor placement while taking neighboring tiles into account. I could probably get it working eventually, but it’s not a necessity, and there are more important things to focus on. Better to figure out an improved system later on for future projects once this one is out the door.

I drew the graphics for another enemy, a hopping spike with legs named “Point Man”, but he may be more trouble than it’s worth. Maybe next time.