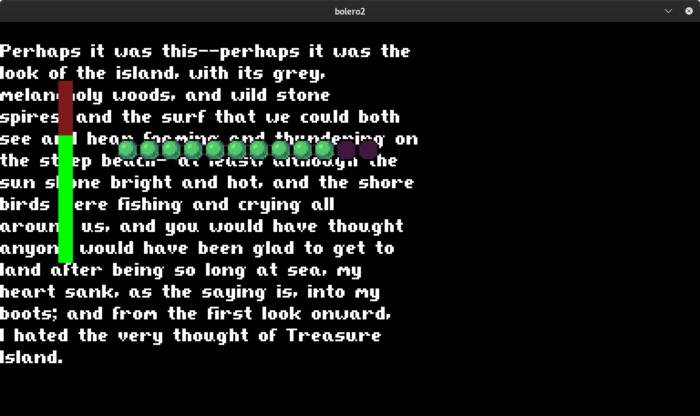 Following a recommendation, I picked up a copy of Robert Nystrom’s Game Programming Patterns. I’m finding a lot of it relevant to the issues I’m facing with respect to project organization, so it’s been well worth getting.

I binge-watched the video devlogs of J. Kyle Pittman that he recorded while developing Gunmetal Arcadia. I liked his earlier games, You Have To Win The Game and Super Win The Game, and thought Gunmetal Arcadia Zero was decent (serving as a short introduction or prequel to the main game), but I’m finding it difficult to get into Gunmetal Arcadia. Anyways, Pittman used a custom engine and map editor for these games, and getting a peek at them behind the scenes was very interesting to me. I was also surprised to learn that he wrote his own synthesizer to produce realtime NES-like music. I assumed he had just used FamiTracker and wrote out Ogg files or something. Pittman has since moved on from retro platformers, which makes these blog videos a bit melancholy to watch. I wonder what will ultimately become of my own projects, and who might be reading these posts, and if they are still on this site or only archived on the Wayback Machine.

I took a pretty big detour in May, and sunk a lot of time into trying to build a music tracker (as you can see from the post titles leading up to this post). I have an audio callback and mixing function now, but no runtime editing interface. If I kept working on it, I think I could have a nice little terminal-based game audio tool on my hands… but it’s not really a necessity, and it’s absolutely stalling this project. I’m very interested in continuing it, but this probably isn’t the best time. Maybe I could keep a hard limit on how much time I sink into it, somehow.

I made some test animations and sketched out some ideas, but have nothing concrete for Bolero 2 yet.

I received a donation on Itch for Hibernator, felt good.

(e 2/June/2019: wording, removed some stuff about Gunmetal Arcadia that isn’t relevant to the paragraph)