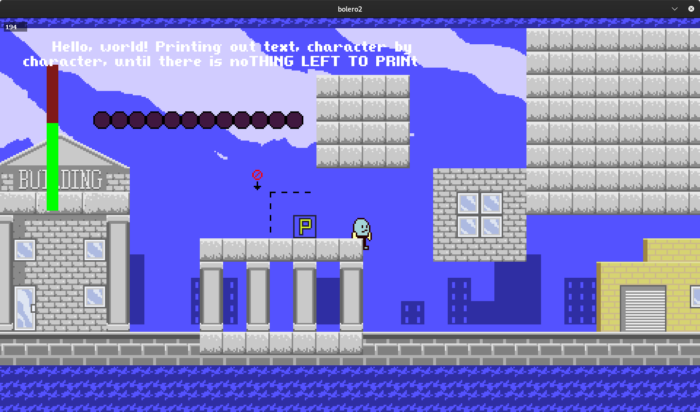 Testing Multiple background layers with parallax scrolling, map wrap-around, and tile animations — all conveniently not conveyable with a still screenshot. Here’s a tweet with a video if you’re curious.

Browsing GUI toolkit options for Lua. Most of them either haven’t been updated in a while (not that that’s necessarily a bad thing), or require building from source on Linux. I did however notice that Python’s Tkinter library has been installed this whole time, and a simple Hello-World program works with no issues. So I’ve been running through some tutorials on how to build forms and attach callbacks in it.

Historically, Tkinter only supported a few image formats like GIF. As of 8.6, it also supports PNG out of the box.

I found a form editor, PyGubu, for designing Tkinter GUIs. Unsure if I’ll be using it at this time, but good to know it’s there.

Lupa allows evaluating Lua code from Python, so maybe I can share parts of the core Lua game engine with external editors this way. Or… maybe it’s good to not to stick too tightly to a single language or environment. I guess there’s also Kivy, which I had been using originally, and which has a really nice-looking UI.

I just noticed that GraphicsGale’s alpha transparency is working. I swear it’s been broken in Wine for a while. Not that I’m complaining, but… what changed? If it stays this way, then I no longer need to run a pass over all of the spritesheets with Pillow to add the alpha.