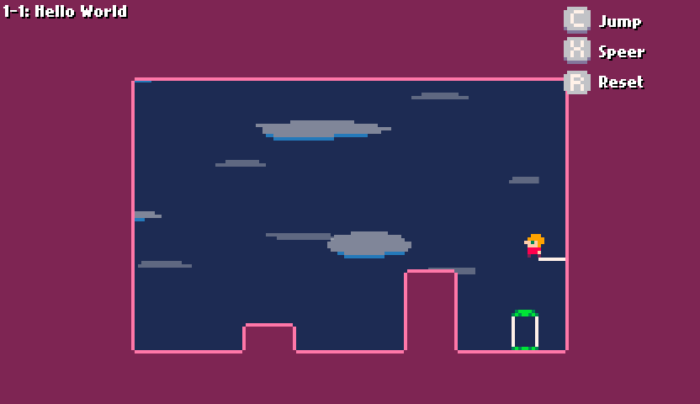 This is a neat puzzle platformer built around the gimmick of throwing projectiles into walls to serve as platforms. I’ve played a few games in the past where this was a feature (namely Völgarr the Viking), but [Speer] would be the first for me where it’s really central to the game. There are some real head-scratchers near the end, I enjoyed it quite a bit.

There is no combat and no higher-level objective (and not even a story that I’m aware of). It’s just you, your Speers, and the author’s increasingly challenging single-screen puzzle contraptions.

My main criticism relates to the objects that can be picked up and dropped in the environment. When you stand in front of an object, the “throw Speer” button becomes “pick up object.” When there are multiple objects in the same spot, it’s not always clear which object the player will grab. This is not a big issue until the last set of stages, but when it does become an issue, you must be extremely careful about where you place objects, and in what order.

I any case, I laughed out loud when I realized you can take yourself out by throwing a Speer through a teleporter behind you.

Completion status: Finished all of the levels and bonus stages with all medallions