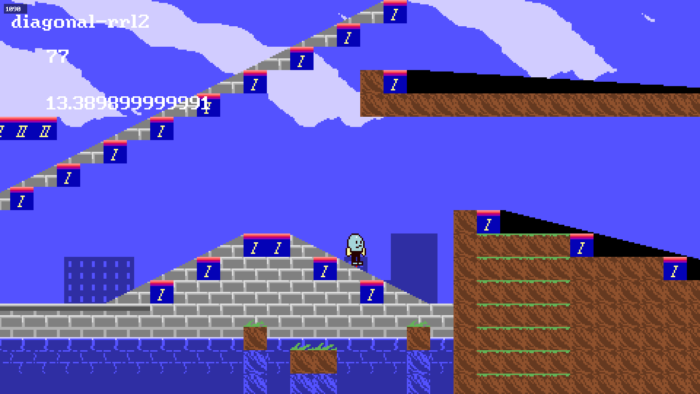 I found an old text file from last August with some notes on how far I was with LÖVE project development. I had yet to finish reading Programming in Lua, was still figuring out how to make the framework play sounds, and was scratching my head over why LÖVE test programs I wrote on Linux appeared as completely white screens under Windows. (It turned out that at some point, LÖVE changed the numeric range for colors from 0 – 255 to 0.0 – 1.0.) The Windows machine was an old AMD APU-based HTPC that I had recently dug out of storage. Running off a single hard drive, it was hideously slow. I installed an SSD, installed Windows 10, connected it to a KVM switch, and it’s a lot more reasonable now.

Back to terrain slopes. I’m making them a property of the terrain def, and specifying two numbers in the range of 0.0-1.0, which represent the height of the left and right sides of the tile (0.0 is the top, 1.0 is the bottom.) When the player’s bottom-center point is overlapping a tile with slope attributes, linear interpolation is used to get a height value from the left and right slope values, using the player’s center X coordinate (with some additional modulo / divide operations to get it down to a number between 0 and 1) as the input. I was going to go by pixel count instead of 0-1, but if the tiles have to be resized for whatever reason, I think 0-1 would be less of a headache to convert. Likewise for collision bitmasks.

I’ve tested a one-tile-high ramp that spans 16 tiles, which is the widest slope I imagine I’ll be using, and it works pretty well (at least when not moving up a whole row of tiles due to the aforementioned glitches). In the image above, it’s the black slope in the upper-right.

I read about a Lua preprocessor on this blog. I have no use case for it right now, but it might come in handy when packaging for different platforms.