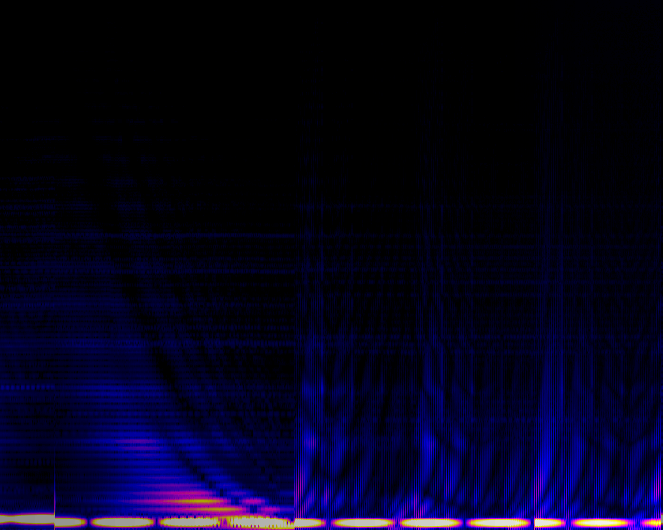 Testing LÖVE / OpenAL Soft audio effects, for which I don’t have a good in-game screenshot to demonstrate, so here’s a pic of an XMPlay spectrum visualization of the output. I uploaded some audio to SoundCloud here.

I am a bit under the weather as I finish this post. Hopefully it makes sense. I might edit it a bit once I’m feeling better.

Added a debug feature to print LÖVE GPU stats and frame render times in the corner of the screen. It looks like automatic sprite batching is being used quite a bit.

I got BGM fade-out and fade-in working. I had planned on supporting music cross-fading, but for now I’m just going to stick to one active track at a time.

I hooked up lowpass and highpass filters for source objects and their effects independently, and added per-frame gain/volume deltas for both. This should squeeze some more life out of small samples and short music loops. As far as I can tell by watching the LÖVE process in System Monitor, these effects don’t have much impact on CPU usage, so that’s good. I’m running all of the supported effects simultaneously, but limiting each source to one effect, just to make the SoundParam tables easier to manage. The effects are:

I added configuration items so that every effect can be manually disabled, and every parameter can be tweaked by the end-user in the config file. I believe it’s possible to continuously adjust effects at run-time as the game context changes, but I don’t think going any further down this road is a good idea if I ever want to actually finish a game.

Independent of the OpenAL filters and effects, I added some simple, per-frame, delta-timed ADSR envelopes to help manage the volume of sound effects. Here is a diagram of an ADSR envelope that I drew, and then realized was unnecessary since I could have just linked the Wikipedia article on musical envelopes instead: 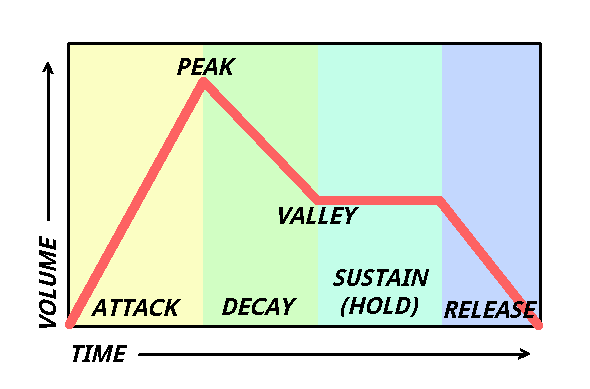 These envelopes will conflict with manually setting channel volume, and also with BGM fade-out / fade-in. I’ll need to work on resolving these issues, eventually, but again, I think it’ll be OK for just one game. I’m just glad this stuff is basically all working now.

I moved all WAV sound effects to a work-in-progress folder, and added an extra step to the build process to convert them to Ogg Vorbis via ffmpeg. They’ll probably use the same amount of memory once decoded in RAM, but this should make the final release package a bit leaner.

After some tests, I decided to to use XM music for the soundtrack directly, without converting to Ogg Vorbis as part of the build process. This shouldn’t be a big problem as long as I keep the total size of the soundtrack down. I’m aware of a few differences in terms of playback between MilkyTracker (the tool I’m using to write the XMs) and libmodplug (the library LÖVE uses to play tracker music):

The folks on the LÖVE Discord shared an interesting Gamasutra article about 2D scrolling systems.

I’ve noticed some occasional phantom player movement while testing. I’m pretty sure it’s a faulty directional pad on one of the controllers I have connected. I wonder if I can do anything to fix it.

I’ve sketched out a roadmap of monthly goals below, mostly focusing on technical hurdles and not necessarily game design. Maybe I’ll make a public-facing roadmap on my wiki and chip away at it. For now, here’s a rough draft.

I’ve dumped most of the tasks into September until I get a better idea of how to spread the work out. Also, I’m not sure how quickly I can get these things done, as I struggled in June and July, but then made great progress in August. So, we’ll see.