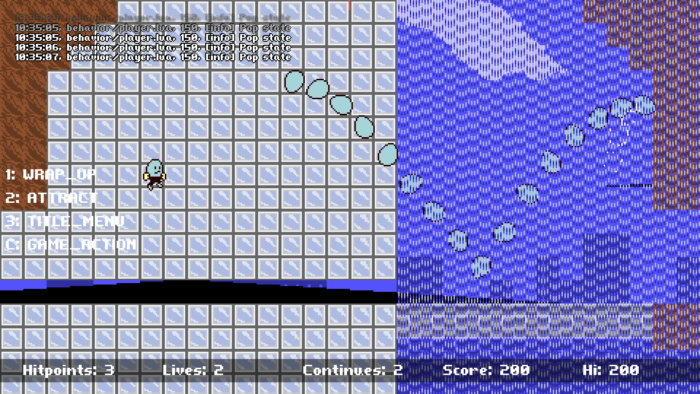 A projectile attack and HUD. Both are placeholders until I figure out what I’m doing.

I implemented the player’s session counters (remaining lives and continues, score), the ability to lose a life and restart the map, a game over state with the option to continue, and support for a full session reset when returning to the title screen and beginning a new game.

I tied spawnpoints to the current difficulty setting, so that they only load on a map if they have matching difficulty tags. I also added a deny list for map spawn points so that defeated enemies don’t spawn back in until another mechanism resets the list. The list can block spawnpoints on multiple maps, so you could have minor backtracking sequences without all defeated creatures reappearing, but bring them all back if the player loses a life.

I got checkpoints basically working, though they need testing. They’re not all that difficult to implement, but I had some trouble getting it done, since they depend so much on what the overall game is like, and the overall game isn’t really there yet. For this game, I’m going with a pretty standard / classic system:

I tried attaching a subscene to the main gameplay area to standardize and reuse parallax-scrolling background layers, but ran into a couple of issues:

So I’ll be leaving those statements commented out for the time being.

A few weeks ago, I started writing a ‘service’ interface to make commonly used actor logic more modular and easier to start up / tear down. At the time, this pretty much only applied to the platformer toolkit. I’ve expanded the interface so that multiple modules can be loaded, with the ability to load dependencies first. For example, the platformer movement / physics service needs to have optional collision methods attached to an actor in order to operate on it, but we don’t want to go through the bother of attaching those methods with a special call in every single game object that does platformer stuff. So make attaching those methods a service, and put svc_collision into the platformer service’s dependencies list.

I put together some mockups for attacks based around manipulation of a heavy spherical projectile. I’m not fully committed to it though, as up until this week, there was no combat logic in the engine. (Hibernator was a “passive” game: you could lose by touching hazards, but you had no way to stop those hazards directly.) To get things moving, I added a basic projectile attack for the player. That’s not truly where my heart lies right now, but it gives me the required environment to work on the player engaging other creatures. Who knows, maybe it’ll grow on me.

Ran a search on the codebase for “WIP” and “TODO”, got about 70 results. Reduced it to about 50, mostly targeting things that are easy to fix or which are no longer relevant.

Ran into a few concerning bugs related to how actors are added and removed in a scene:

Whoa, it’s starting to feel like a real game now.

Early in the week, I ran out of tasks on my immediate engine / core todo list. That’s never happened before since starting this project last October. I kind of feel like I’m going to wake up and still be dealing with sloped terrain issues.

I spent some time this weekend thinking about how the project should look as a finished game, and made mild progress, but I still don’t have a clear picture. I’ll start with eight levels with eight bosses, and reel it back in if it’s too much work.