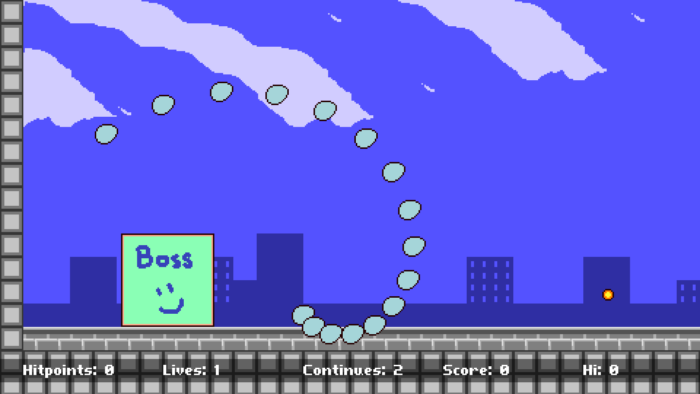 A stand-in for the end-of-level boss, which has just defeated the player.

I implemented a dummy boss, which takes one hit and then transports the player to the starting map of the next level. So it’s now technically possible to go through all of the game, start to finish, even though in practical terms there isn’t really anything in any map. But hey, it’s a step forward.

Implemented a simple sleep/wake system for creatures, so that not every creature on the whole map is active immediately after a map load. Actors that opt into this service remain dormant until getting within a certain proximity to the virtual camera. When woken up, they recursively check for any nearby sleeping creatures and wake them up as well. This preserves certain kinds of formations, like patrolling characters walking close together. I tried to come up with a way to put creatures back to sleep when they’re too far away, but decided to just leave them awake indefinitely, and construct levels out of multiple smaller maps, instead of large, all-in-one maps.

Made a simple ‘shot-blocker’ which deflects player spheres, but only for a half-second following the player releasing the shot. So if the user ricochets the shot around, it can still get past.

I stopped drinking caffeinated beverages this week (mainly soda) and had difficulty adjusting. I couldn’t concentrate, and didn’t get much done besides some sketches. (The irony of feeling half-asleep while trying to come up with a waking system for creatures is not lost on me.) I’m feeling better now though.

I was considering eight levels, but five would probably be more manageable. As I mentioned above, smaller maps linked together is probably better for getting this thing done.