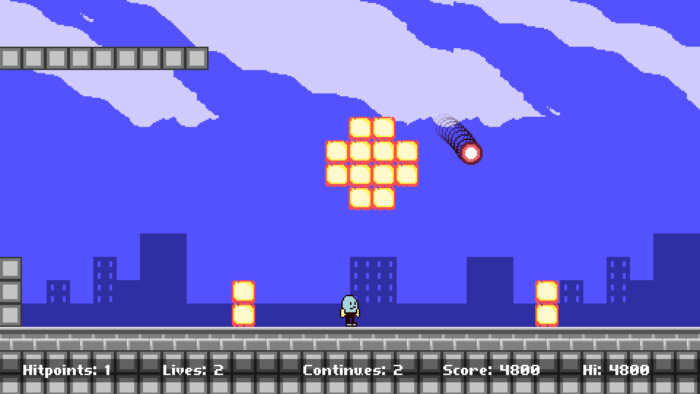 Testing a shot modifier: turning the player’s sphere into a fireball when passing through fire terrain.

Began work on a environment-based shot modifier. When the player’s sphere passes through terrain marked as ‘hazard-fire’, the sphere turns into a fireball. The next time the shot collides with a wall or stronger opponent, it explodes. This would require the user to take advantage of environmental hazards, or an enemy’s fire-themed projectiles to turn their own shots into bombs.

Did prelim work on implementing some more creatures. Things that hop up and down vertically, and creatures that are embedded into ceilings and corners. I have animations for spider and buzzard-like creatures that I need to implement as well.

Made improvements to the jump-through platforms, making them easier to fall down through when holding down + jump, and allowing the player shots to pass through them. I should make one other platform type, which the player can shoot through but not fall down through, for special circumstances.

The player actor now switches to a sleeping animation if no user input is detected for over two minutes. Very important stuff.

Not much progress this week, and I am to blame for that. I’ll work on my time management. I need this to get done.