I was feeling very pessimistic when I sat down to write this — I wish I was further along — but it doesn’t seem so bad when I lay everything out for the month. 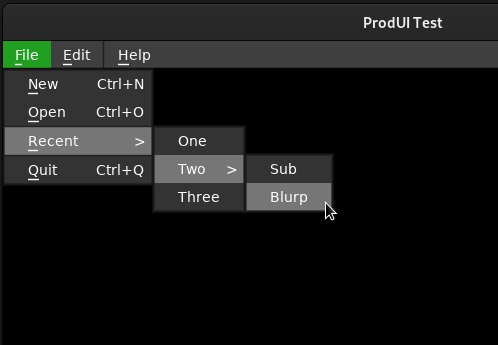 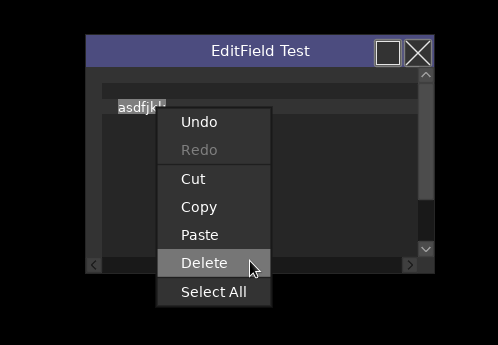 Some common text commands in a pop-up menu.

These have been a long time coming, and it’s great to finally see them in action in the WIMP branch of ProdUI.

Last month, I wrote that I planned to make generic menu widgets the basis for things like right-click menus and menu bars. This was a mistake, as they both have subtle differences in handling from what is essentially a list selection box. For one thing, they require the ability to seamlessly transfer mouse-pressed state across widgets in a group. ProdUI was designed not to do this, and enabling it has required the inclusion of some pretty hacky functions at the context level.

Eventually, I split menu_bar and menu_pop_up into their own widget definitions, and it was then easier to work on them individually instead of endlessly breaking things while trying to fix other things.

Besides that, I also had a number of problems with transferring ownership of the UI thimble (selected widget with keyboard focus). I won’t go too deep into this because it’s hard to explain without the help of diagrams or a video, but when we select the menu bar or otherwise open a pop-up menu, the thimble is transferred to the pop-up menu so that it will respond to keyboard input. When that menu dies, what do we do with the thimble? Sometimes we need to restore thimble ownership to the last widget that had it. Sometimes the user has already assigned the thimble elsewhere, such as by clicking outside of the menu, and we don’t want to override that. I thought I had this under control, but just noticed while writing that there are still issues. I guess I’ll have to outline every scenario and step through them. It’s not a huge deal if a keyboard+mouse user loses focus, as they can just click on the widget again, but it’s a big problem for keyboard-only users.

My first attempt at menu bars had three states: idle, opened (with a pop-up menu spawned), and an in-between state where no pop-up was present but the user could select categories with the left and right arrow keys (or tab). I ended up removing the in-between state because it made the thimble ownership issues much worse, and getting stuck in this state could also be confusing when other things are happening in a video game. (As much as the WIMP branch is intended for tools, there’s nothing stopping a library user from implementing it into a real-time sim or action game.) Menu bars don’t hold the thimble at all now, so that’s one fewer thing that can mess up.

To activate the menu bar, the user has to hit an explicit key mnemonic (ie Alt+F for File) or press F10.

I originally planned to implement pop-ups and modal windows by pushing new root widgets onto a stack of instances. It would enforce an “always on top” status, and would be especially nice for modals in that it would fully prevent interacting with windows beneath the current top of the stack. However, I can’t really separate pop-ups from their client widgets like that without causing further issues. The solution was to provide a sibling-level sort method based on widget priority numbers.

I wanted an algorithm that is simple, not requiring tuning; stable, maintaining the order of widgets at the same priority level; and which works without making and throwing away temporary tables. In this specific case, ProdUI will always be sorting based on a numeric key, so we can just do a greater-than check instead of calling a comparison function. I narrowed my choices down to Pigeonhole Sort and Counting Sort. The latter eventually won out because it requires only one scratchspace table, whereas Pigeonhole would need a separate array for every priority slot. This scratchspace table is stored as an upvalue, and reused for every call to the sorting function.

(Incidentally, I have been using Pigeonhole Sort to arrange sprites in Balleg this whole time without realizing that that’s what it is. Instead of sorting the actors, however, the pigeonhole arrays are passed on to the render code.)

Here are the current priority assignments:

I added some best-effort locks on certain functions that are likely to corrupt the widget update loop. There are exceptions, but bad things can happen if you add or delete entries from a table that you are currently iterating over with for. The locks should hopefully catch some of these issues, though of course it’s impossible to catch everything.

For example, a widget can’t remove itself during its own update callback because it would mess with its parent’s children table, which is currently being iterated. However, it can post a deferred removal action to a table of asynchronous events owned by the context, to be handled immediately after the update loop.

I wrote some Lua code to get the coordinates for an underline in a single line of text. This is needed for showing key mnemonics in menu options.

Given a string with two underscore markers: foo_b_ar

Cache the results so that you only need to do the string splitting and width calculations when the text is changed.

I needed a consistent way of storing and referencing key shortcuts. Just the key enumeration isn’t enough, since I also need to track if it’s a KeyConstant or a Scancode (many strings among them are identical), and if the Ctrl, Shift, Alt and/or Gui keys must be held down. I settled on two forms: a hash table with separate fields for each piece of info, and a packed string.

The table is pretty straightforward:

The string form poses an additional issue: both KeyConstants and Scancodes use a number of symbols that appear on the US QWERTY keyboard layout, leaving few easy-to-access symbols to use as a separator token. Thankfully, at some point, space was changed from the literal " " to the word "space", so I can use that as a separator. All letters in the enums are lower case, so I can reserve upper case letters for the header bits.

The string format is then a series of single-byte chars, with a space separating them from the KeyConstant or Scancode substring. We can scan most of the header data with string.byte(), though we do still need string.sub() to get the final enum.

Ctrl+Alt+Shift+Q becomes "KCSA q". This string isn’t appropriate to display to the end user, so I also have a function to convert the latter to the former.

I guess another option is to map all KeyConstants and Scancodes to numeric values, and reserve some bits for the modifiers.

I wanted menu items to support shortcut key combos, but wasn’t sure where to put the data and code that implements them. The menu bar itself seems like a good location, since it contains the pop-up menu definitions which display the shortcuts for each command. However, I still want the commands to work even if the menu bar is destroyed, or never created in the first place. So instead, they are attached to the widget that owns the menu bar (in this case, the WIMP root).

Keypress and keyrelease hooks are stored in arrays belonging to the WIMP root. When a keyboard event bubbles up to the root, it first allows everything in the associated hook array to try and act on the event (and cancel any further work on it by returning true) before continuing its own processing.

What happens if there’s a conflict? Hooks are evaluated last-to-first, so the most recently-added hook gets first dibs. Before that, if any widget from the current thimble-holder to just below the WIMP root acts on the key event and returns true, then the hook will never be processed. I got a heaping dose of confusion when some debug keys in the text input box prevented F10 from bubbling up.

Layouts always involve one parent widget and its direct descendants, and the parent layout is applied during its reshape callback to its children. Layouts are opt-in, so children that aren’t registered to the parent’s layout list are left alone.

I have a few reshape mechanisms planned. The main one (and what is currently used to set up window-frames) involves cutting chunks of a “layout space” rectangle and fitting child widgets to them, similar (as far as I can recall) to the pack geometry manager in Tk. If you want to fit widgets into a sub-section, you can cut it off of the current layout rectangle, push it onto a layout stack, fit the widgets, then pop back to the old rectangle.

Anyways, it’s far from battle-tested at this point, but I hope to continue fleshing it out. 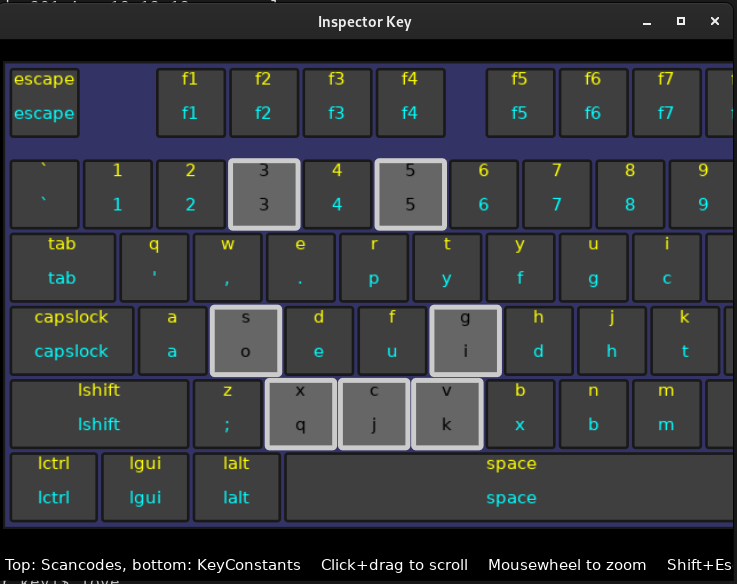 I had to hit PrintScreen with my nose to take this screenshot.

I wrote this to help answer some questions I had about Scancode and KeyConstant behavior.  It gets fresh info every frame, so keyboard layout changes should be visible relatively quickly (after a pause). One important thing I learned is that while “unknown” as a Scancode or KeyConstant shows up in love.keypressed and love.keyreleased, it seems to never return true in love.keyboard.isDown or love.keyboard.isScancodeDown. At least, that’s the case on my PC.

Inspector Key needs some more work before it can be considered a well-rounded utility. It might be good to circle back to this once ProdUI is more usable.

I got curious about VSync-based update intervals in LÖVE, and spent some time experimenting and running tests. I didn’t fully get there due to practical reasons.

I wrote a few paragraphs of speculation here, but it’s probably best not to share it without a real demo to back it up. In lieu of that, here are some framerate tests I performed on my PC + monitor combo, taking the refresh rate from Fedora’s Display manager, the number from love.window.getMode(), and a 5 minute framerate average with a few seconds of warm-up.

In this case, Fedora’s numbers are pretty accurate to the 5 minute test, and the getMode numbers are only reliable if the underlying refresh rate happens to be a whole number, or nearly so. Would this always be the case? Maybe on someone else’s computer, the numbers from getMode are all dead-on. I concluded that they are good for displaying to the user, but can’t be relied on for timing.

That’s all I will write on the idea for now. 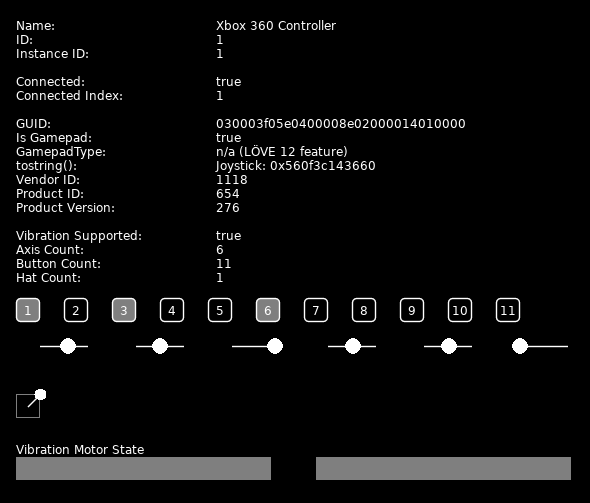 Joystick stats for an XBox 360 controller.

The front-end branch of ProdUI needs to have pretty good joystick support. To prepare for that, I started a Joystick Manager, and also a utility to examine stats for every connected joystick.

I’m not sure what exactly the Joystick Manager is going to handle — I just started writing it on the 28th. At the very least, it needs to track button presses and releases in-order so that they can be queried during event callbacks, similar to how the ProdUI Keyboard Manager works. It’d probably be good to track joysticks that have been disconnected as well, because the LÖVE Joystick objects remain populated and will re-activate if the user reconnects them.

I wish I was further along. I told myself that regardless of what I had done on ProdUI, by about the 15th of December, I should drop my focus on it and get whatever’s finished integrated into Balleg and move on. Now I’m not so sure. It may be better to just see this through to the end. Dunno… In any case, I’ll update again near the end of the year.