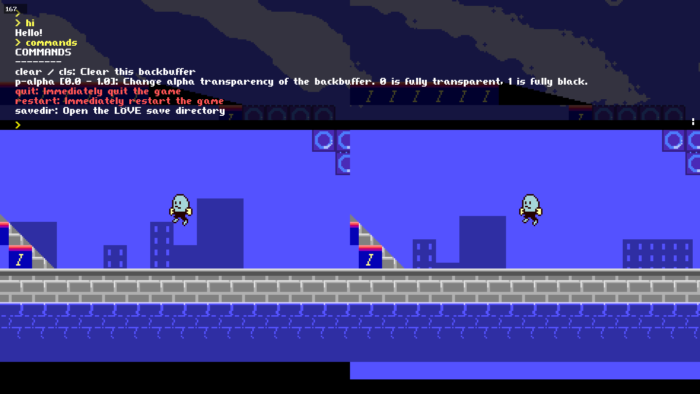 The new in-game overlay / console activated by the backtick key (`).

The codebase feels a little less familiar to me now, what with several new module additions and an overall reorganization this month. I should review where I’m at this upcoming week and figure out next steps.

I learned about how Lua’s debug.debug() console can be called easily from within LÖVE, as long as a terminal is attached to the process. The main thread halts, and you can type Lua commands directly, and then exit by typing cont. Might be useful for debugging, though it’s not a full shell with command history and stuff. I don’t plan on including this in non-development releases (though it’d be trivial for someone to add the call back in.)

I overlooked an important caveat with the Lua string library: it basically handles strings on a per-byte basis with no regard to encoding. This works OK if you are only using the ASCII portion of UTF-8, but if you call string.sub() on a string with multi-byte UTF-8 characters, you can corrupt the string and cause an error*. LÖVE includes the Lua 5.3 utf8 library to help get the correct offsets. So I’ll have to review all string library calls at some point and make sure they’re OK.

I’ll try to be ambitious this upcoming week: